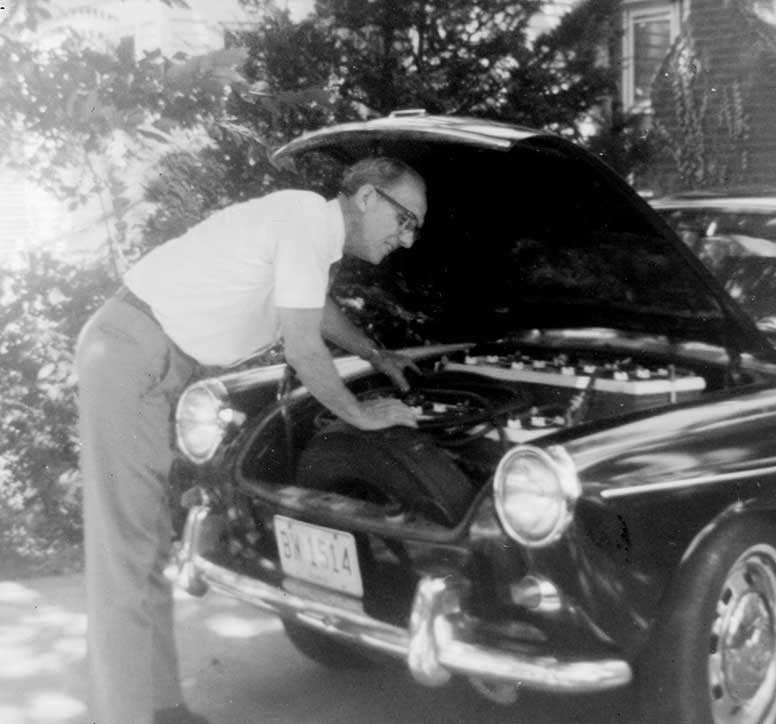 When I was 10 my grandfather built an electric car out of an old 1970 Volkswagen Fastback, a modest little two-door that was a bit bigger than the Beetle. This was 1977, shortly after the Arab Oil Embargo, when many Americans were first starting to think seriously about just how valuable alternative energy could be. It could make the nation less vulnerable to oil price fluctuations or supply shortages, relieve us of the expensive and hazardous burden of “policing” the Middle East to protect our oil supply, and cleaning up our smog-filled air (climate change was not quite on the public’s radar yet).

Grandpa loved working on cars and took it upon himself to build an electric. He used 6V golf cart batteries for power and built the whole thing out of various commercially-available parts. At night he plugged it into an outlet in the garage, then drove it to work in the morning. It had a range of 45 miles. The thing that always struck me was how quiet it was.

It had some issues, including the occasional explosion in the trunk when hydrogen gas produced by the batteries would accumulate in the confined space and  ignite when one of the relays sparked. But it worked well and was a real testament to Grandpa’s ingenuity and resourcefulness.

And now, 42 years later, my wife and I bought a production electric car–the Nissan Leaf. It’s remarkable how far electric car technology has come since 1977, although at the same time it’s also kind of remarkable that it’s taken that long for electric vehicles to begin going mainstream. But that certainly seems to be where things are going. Certainly any serious climate change solution will require a significant shift away from gasoline to electric vehicles.

We always figured an electric car would be a great complement to the home solar system–after all, who wouldn’t want to stop spending hundreds or thousands of dollars on gasoline every year and instead “tank up” with energy you generate for free at home? While cutting carbon  emissions at the same time?

The reality, though, is that charging an EV takes more electricity than your typical home system can generate. Our solar array is relatively large for a home system at 6.4 kW but even at solar noon when it’s cranking at capacity it will be close to maxxed out satisfying the demand of a Level 2 EV charger (240V/30A). It’s possible to charge with a Level 1 charger (120V/12A) but that takes much longer and is  less efficient (energy wasted as heat during the charging process).

Since we’re grid-tied, however, that’s not really a problem–we can charge the car fully during the day using all the energy we generate and the grid will supply the balance. It still saves quite a bit of carbon–even if we only charged at night, using strictly grid power, the car would produce only 96g of CO2e (carbon dioxide estimated) per mile versus 381g for a gas-powered vehicle (https://www.ucsusa.org/clean-vehicles/electric-vehicles/ev-emissions-tool#z/04843/2018/Nissan/LEAF%20(40%20kWh).

The big EV question, of course, is range…just how far will this thing take you before it poops out? Our Leaf has a 40kWh battery which Nissan says will average 150 miles (for $6K more you can get a 62kWh battery rated at 226 miles). We’re still testing and experimenting, but one thing that’s clear is your driving habits have an effect on your range (as do the conditions: wind, terrain, road conditions, etc). For example, the Leaf can actually regenerate power during deceleration–so rather than using your brakes when you pull up to a stop sign, you can switch “gears” and use the car’s momentum to put a little juice back into the battery. It also helps if you don’t drive like a 16-year-old boy trying to impress the girl sitting next to him!

Heating and air conditioning can also reduce your range–unlike a conventional car, the Leaf’s heat is entirely electric, so if you turn on the heated seats and steering wheel with the heating system on high, you’re going to drain the battery faster.

And the driving “experience?” That’s probably not the first criteria for most EV buyers, but the Leaf is no dog. Not exactly like driving a Porsche 911 (athough the chassis-mounted battery gives the car a nice low center of gravity), on the other hand it will get up and go when you ask it to and doesn’t plod up hills like a rented mule. I haven’t pushed it to its limits, but in everyday driving conditions–city, highway, or unpaved roads–it does just fine. You wouldn’t really know you’re driving an electric vehicle from the performance.

It’ll be interesting to see how it does in the wintertime. Cold temperatures reduce battery capacity, and I’m curious to see how it handles in slick road conditions with all-season radials (we may get snow tires if necessary).

It’s great to see electric cars coming into the mainstream–from everything I hear, they are the future and will be a major part of any climate change solution. Here in Maine EVs make up only 1% of vehicles on the road today, but that figure is growing. Rebates certainly help (between rebates offered by Nissan, the State, and the Federal tax credit for EVs, the price on ours dropped from $33K to $18K) but a lot more could be done to encourage people to buy EVs. Expanding the network of charging stations is key. Certainly as EV ranges increase with better battery technology, they will become more and more attractive to car buyers.

I wish Grandpa was around to see these new cars. I’d love to take him for a spin in the new Leaf! He’d be so impressed with how far things have come.